When James Forbes of North Country Charcuterie offers slices of his beautifully marbled salami at the Worthington Farmers Market, it’s hard to say “no.” This “Salami Swami,” as his friends call him, generously shares these tasty samples as he talks about charcuterie’s deep culinary roots and the craftsmanship behind this ages-old curing process.

When James Forbes of North Country Charcuterie offers slices of his beautifully marbled salami at the Worthington Farmers Market, it’s hard to say “no.” This “Salami Swami,” as his friends call him, generously shares these tasty samples as he talks about charcuterie’s deep culinary roots and the craftsmanship behind this ages-old curing process.

“The French style takes kitchen scraps and turns them into some beautiful things,” James tells newbies about these preservation techniques that date to Roman times and flourished in 15th century France. Back then, the French government prohibited the sale of uncooked pork, so charcutiers came up with ingenious ways to cook (salted and dried) various dishes to be sold.

This chef-turned-charcuterie-artisan is building a loyal following of fans, including Kent Rand, cheesemonger at Weiland’s Market in Clintonville.

“In our cheese case, we have the best salamis from around the world,” says Kent, “and nothing matches North Country Charcuterie’s salamis for their complex flavors.” In addition to its two salamis—Tripel Pigs and No.1, North Country also offers El Diablo chorizo and coffee bacon.

In foodie towns across the country, charcuterie is experiencing a revival, thanks to rising artisans like the Fatted Calf in San Francisco, Olympic Provisions in Portland, Publican Quality Meats in Chicago or Smoking Goose in Indianapolis.

Here, in Central Ohio, North Country Charcuterie was founded in 2014 by James and his mother Jane. Later, his brother Duncan joined the team. The trio is eager to enlighten curious customers. They find many are familiar with charcuteries from European travels or restaurant charcuterie plates. Still, they are ready to learn more about the curing process and ways to best enjoy them. James is teaming with Kent to teach “Salami and Cheese Tasting 101” on June 16 at Weiland’s Market.

As Kent explains, these Old World-style salamis are best enjoyed like fine cheeses, beginning with a look at the thin red-and-white slices followed by a smell of their fermented scents, a feel of the aged links and finally a “full 30-second taste in the mouth.” 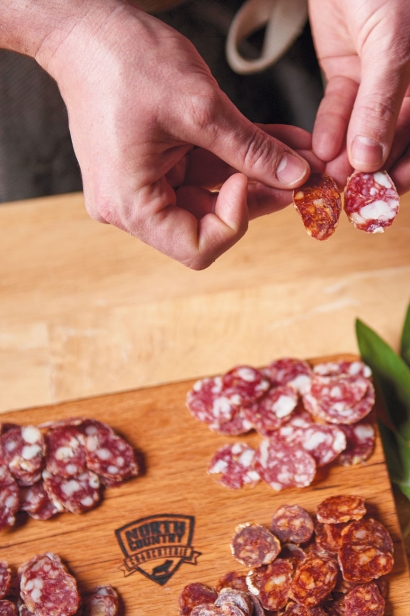 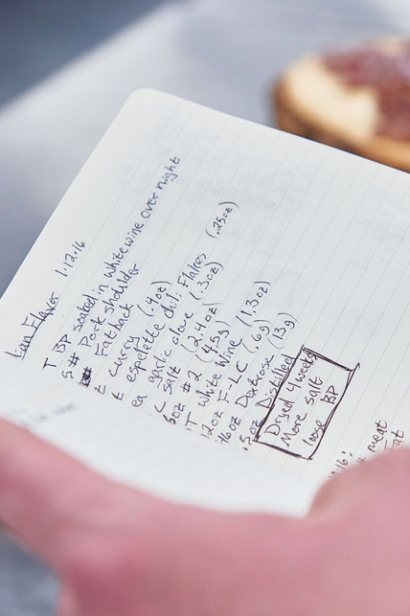 James invited us inside North Country Charcuterie’s work space at The Commissary’s commercial kitchen in Marble Cliff to see firsthand the artistry behind this family business. Here, James, Duncan and Jane all lend a hand. They typically churn out 70-pound batches over two days, but for this demonstration they prepare a three-pound batch.

Dry cured salamis begin similarly to fresh sausages. Meat, salt and seasonings are ground together and stuffed into casings. But instead of being heated, they are dehydrated in a curing chamber.

James begins by trimming the fat and tendons from pork shoulders. He explains he prefers heritage pork breeds like Berkshires over modern industrial ones for their rich flavor, marbling and fat content. After trimming the meat, they weigh it and grind it in a meat grinder.

As James works, he shares how he got his start. He first experimented with curing meats while in culinary school. He started with fresh pâtés and terrines then moved on to cured meats. He even won the state and regional competitions with a dish including lots of fresh sausage.

After culinary school and an apprenticeship under Chef John Wickham at Rocky Fork Hunt Club (and now chef at The Seasoned Farmhouse), James started at the Hilton’s Gallerie Bar & Bistro where he further practiced his craft as he served up various charcuterie plates. After visiting charcuteries on a family trip to France in 2013, he and Jane returned home ready to start their own charcuterie. James bought a refrigerator on Craigslist and converted it to a curing chamber. He experimented with different salamis leaning on Michael Ruhlman’s Charcuterie for direction. As the book acknowledges, dry-cured meats are “the quintessence of the charcutier’s art and the most difficult to achieve” and can “drive even professional charcutiers crazy.” James agrees as he shares that his first batch ended up too dry and salty. At the same time, he says a successful batch is very satisfying.

James continues the demonstration as he adds a portion of frozen pork fat. He explains it’s crucial the pork fat is very cold, so the chunks don’t melt and cause ugly smears. Jane sprinkles in the curing salts and spices that she has carefully measured. James says these salts are key components in preserving the meat.

For this batch of Tripel Pigs, James mixes in a reduction of Rockmill Brewery’s cask-aged Tripel beer to add flavor and help with fermentation. He explains fermentation causes beneficial bacteria to feed off the sugar, generating lactic acid, which protects the meat from spoilage as well as introducing the pleasingly tangy flavor.

As he begins hand-mixing, he doesn’t complain of the ice-cold ingredients or the grueling task of binding these ingredients. Instead, he smiles as he explains that hand mixing is part of the artistry and an important step in binding the ingredients without generating heat from a commercial mixer.

Next, he transfers the meat mixture into a sausage stuffer. Nearby, Duncan has completed the tedious job of prepping the casings for stuffing. As he flushes and hydrates the casings, he explains the task is much like filling balloons. He threads the prepped casing on the tube of the sausage press. James then begins filling the casings, pinching them every eight inches then twisting them into links. Duncan ties off a rope of four links with butcher’s twine and pricks the links with a needle to remove air pockets. The team labels and weighs each rope then carries them to the curing chamber set at a constant 80-degree temperature and 85% humidity.

Over the first few days, James tests the salamis’ pH levels to see if fermentation has begun. He’ll also monitor drying signs and the white bloom on the outside casings. James explains this outer bloom protects the meat against pathogens. He says it’s harmless, like the rind of cheese, and can be eaten or removed depending on personal preference.

Once the salamis have cured for five weeks, James will check their weight. If they’ve dropped the required 45%, then they’re ready to package for sale.

James encourages customers to enjoy them sliced thin at room temperature for optimum flavor. He says they’re best served on a tasting board with cheeses and paired with a malty beer or wine. In a recent chef ’s challenge, James says competitors used El Diablo chorizo in other clever ways such as a chorizo hash, a carbonara and chorizo tacos.

This summer, North Country Charcuterie will be available for sale through groceries and served in restaurants and tap rooms as sample boards. The business recently gained the Ohio Department of Agriculture’s permission to sell its salamis throughout the state. The regulatory process has been a big hurdle as the team has learned the curing rules and how to prepare the scientific documentation.

“You have to be very determined to do this,” says James as he explains he must fill out four forms for each batch.

The hassle will be worth it one day as they dream of owning their own space. For now, they continue to learn, practice and experiment with new ingredients, techniques and recipes. After months of patiently waiting on the latest batch of cured whole pork muscles from local Anderson Farms and Six Buckets, they’ll soon be offering samples of coppa, prosciutto and lonza.

Salami-maker looking at new products and markets after moving into larger space...
Scroll to top